Medevi Brunn was founded in 1678 by Urban Hjärne and is Sweden’s oldest health spa. The water in the well is rich in minerals and considered healthy - especially in combination with the atmosphere at Medevi village. The 100 buildings in Medevi are 150–300 years old and haven’t been modified since 1880. Today some of the old buildings hold a hotel with authentically restored rooms, a hostel, a restaurant and a café in the spa park.

Music has always been important in the Daily life at the health spa. Musicians played at the buffet in the dining hall and for dancing in the society hall. When the brass instruments got modified with valves around 1820, a chromatic scale could be played and suddenly a new sound became dominant at the health spas.

Brass quintet or sextet - often reinforced with drums or octet with flute, clarinets and brass became the ensembles in demand. This kind of ensemble is today synonymous with ”spamusic”. Around 1850 the music at Medevi was provided by visiting military bands but in 1870 Medevi Brunnsorkester (spa orchestra) was founded. Medevi spa hired a bandleader who gathered musicians from different military bands who formed the ensemble for the summer spa season.

The musicians were military musicians on summer leave or retired from their duty. Military musicians were retired already at 50 years of age. Musicians for Medevi Brunnsorkester were recruited in this way for many years until the end of the 1960’s when the military bands were cut down and the retirement age was increased. Also the traditional sextet instruments were in the military  bands substituted with trumpet, horn, trombone and saxophone. Suddenly it was hard to find competent wind players for the summer season at Medevi.

Medevi Brunnsorkester has remained as a ”traditional Swedish brass sextet” although this kind of ensemble became out of fashion already in the 1920’s. Only the Swedish navy had sextets playing on ships until the 1940’s. Medevi Brunnsorkester still uses historic brass instruments that are very different from modern trumpets, horns, trombones and tubas. The sound is softer, weaker and blend very well together within the sextet. The instrumentation is Eb-soprano cornet, Bb-cornet, Alto horn, Tenor valve trombone, Tenor horn, Tuba and drums. The instruments are made by the Stockholm maker Ahlberg&Ohlsson, founded 1855 and produced  brass instruments in the typical Swedish models until it folded in 1959. Most of their instruments were worn out by the military bands and Medevi Brunnsorkester is fortunate to have found original instruments still in playing condition, many of them being over a century old.

The music played at Medevi has always been very diverse. All kinds of music in demand were arranged for the sextet: classical Music (even Beethoven piano sonatas!) but also opera and operetta, walzes, marches, polkas, hymns and popular tunes. Besides that, the orchestra also performed music for dancing.

The repertoire used today consists of more than 1000 pieces and offer big variety. We keep our tradition by mainly performing Music from late 1800’s in the Viennese style. But we also constantly renew our programs with more modern music, arranged and adapted for the sextet and its sound possibilities.

Medevi Brunn is perhaps most famous for ”Grötlunken” (The Porridge Walk). It is a tradition that first occurred at Sätra Brunn (spa) but since 1860 at Medevi. Every evening at 9:00 pm the orchestra marches slowly together with spa guests and visitors. It is a nice way to gather and end a day at the spa. The music used for all years is a march by Friedrich Zikoff: “Defilard March”.

Medevi Brunnsorkester has had many leaders. One legendary leader was the Eb cornettist Allan Johansson (1876-1958) from Karlskrona. As sergeant major at Blekinge regiment and later Karlskrona Grenadiers he took over as a leader at Medevi from late 1920’s until early 1950’s. Lars Eric Andersson (1942-2007) came to Medevi as a young, aspiring valve trombonist in 1969. He found musicians that were more than 80 years old and played in a very authentic way, stylistically. Lars Eric became devoted to preserve this unique, Swedish military music style based on Viennese interpretation with tempo changes, lyrical vibrato playing and crisp rhythmical articulation. Thanks to Lars Eric we are now a team of his ”pupils” who continue his devotion for the future. Every summer Medevi Brunnsorkester holds a weekend course for ensembles that wish to develop authentic playing. This is done with support from ”Sveriges Orkesterförbund”. Presently, Lars Eric’s leadership is taken over by Anna Hansson and Magnus Eriksson.

Welcome to visit Medevi and listen to us! 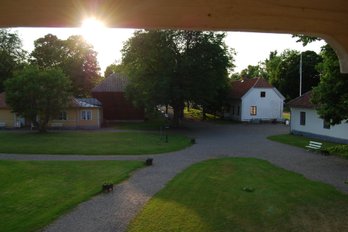 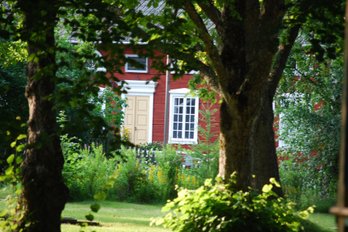 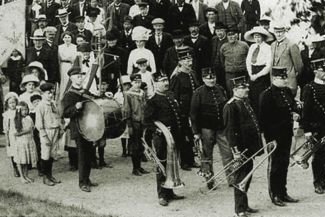 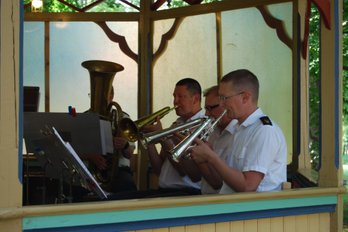 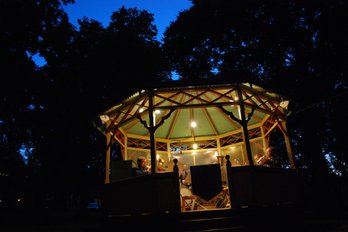